I cannot even begin to tell you how tired the Raiford family is this morning. We had the most amazing weekend – but it was tiring. We took the kids to Texas to visit my grandmother for her birthday, and it was such a wonderful trip. But, it wasn’t a trip that included a lot of sleep.

Let’s see…I think the most we slept was Thursday night in our hotel room in Amarillo. We went to bed around 10:30 and woke up at 7 am. Other than that, we are talking very little sleep. We had a late flight into Dallas on Wednesday night that put us in our hotel room at 11:30. We all needed showers and baths – I will not let anyone go to bed after being in an airport or on a plane, ever – and it was later than that when we went to bed. We woke up at 5:30 am so we could get on the road to my grandmother’s. It’s an almost 6 hour drive, which is a lot. 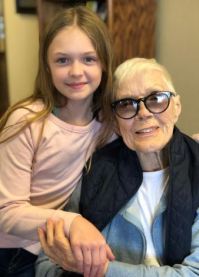 But, we were able to spend the entire afternoon and evening with her, then we took the kids to dinner. Then we checked into our hotel and my cousin, Lesly, and her daughter, Tamia, checked in after their flight from California. We got to spend a few hours visiting with them, and that was amazing! Despite living on opposite coasts our entire lives – Lesly in California and me in Florida – we spent a LOT of time together growing up. Our dad’s are brothers, and my grandmother lived near us in Florida until I was 18. So, they visited at least once a year, and we spent so much time together.

We hadn’t seen her in a few years, and it was SO good to spend some time with her this weekend, too! Friday was my grandmother’s birthday, so we went birthday shopping, picked out a cake, bought her favorite beer for her, and we had the best time with her. She is so much fun – and our kids are so fortunate to get to know her like they do.

She spent the weekend sharing her life with us, and it was so much fun. Our kids are so excited to go back to school and share some of the things she told them, and who can blame them? They had no idea that their grandmother had tea with First Lady Eleanor Roosevelt in the White House many year ago (she was invited because of the work she did for the government following the terrible Pearl Harbor tragedy and all that came from that). They had no idea she’s been to the Super Bowl. They had no idea that following her work for the federal government in her early 20s, she decided to get into a car with three girlfriends and drive for 10 days clear across the country to live in California. 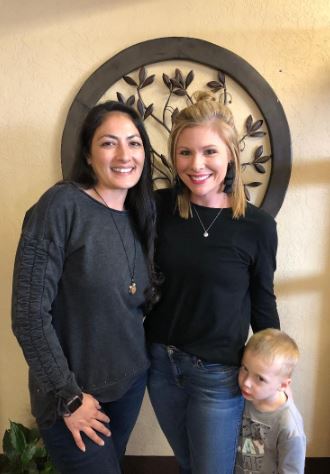 It took them 10 days. They had to get an oil change every 1,000 miles. They went through 8 new tires, and they slept during the day and drove at night when the reached the desert so they would not overheat the car. She then landed in LA, where she spent several more years of her life. She traveled by train to see her family – and my grandfather would visit her at the train station where she had a 2-hour stop in New Mexico – so they could spend time together every few months.

They had no idea that they have a very famous cousin – well, she’s my dad’s cousin. My grandmother’s sister Alice’s daughter. So, my dad’s first cousin, June Lindemann. Grandma showed them the book that June – who was not just my grandmother’s niece but also her godmother – wrote about her life as a beauty pageant queen. She was Miss California when she met and became engaged to the son of a wealthy South American Ambassador. She moved to Chile to live with them when they got married, and then they had a baby. Unfortunately, she had to flee the country on the very last plane that left before the Communist state took over and lives changed. Her husband decided that rather than go against the communists, he’d join them so that they would not target his famous, prominent family. And she took the very last flight authorized to leave Chile to escape with her newborn son.

Her story is in her book – Pageants, Politics, and Promises. And it’s unbelievable. Read it.

We had the most fantastic weekend. We met new people. We had a lot of cake. We painted rocks and hid them in my grandmother’s neighborhood for people to find. We had fun. We really, really, really had a great time.

We are tired, but our hearts are full.

Now that we are home and everyone is back to their normal routine, we are still exhausted, and that’s all right. It probably doesn’t help we were gone the entire weekend before and only home for two days before we took off for Texas, but we will get over being so tired.

We will never, ever get over how much fun we have with my grandmother. We will make that long ass trip several times a year to spend time with her. This was our 3rd weekend in Texas in the past six months, and we are so overwhelmingly fortunate and blessed to be able to make the trip so often to spend this time with her. I won’t lie – I strongly dislike where she lives, but she’s happy there and she’s got all the farmland in the world to look at every morning when she drinks her coffee. It might smell like cows and the entire place is orange – orange – and colorless, but I will tell you that those Northern Texas sunsets and sunrises are spectacular. In fact, they are unlike anything you’ve ever seen, and I’ve seen some spectacular sunrises and sunsets in California and Hawaii – and even the sun setting between the buildings on Fifth Avenue in New York City. You can’t beat a Texas sunrise/sunset.

And you cannot hate a place where the world’s coolest woman lives.